A victory for local democracy! 5 years to the day after we formed Save Bronte, the Court has vindicated our opposition to overdevelopment in our neighbourhood.

On 23 December 2016 new developer Danny Avidan and Rafi Assouline lodged 2 new planning applications for the Bronte RSL site that will have a huge impact on our neighbourhood and take us back to the days of 2012. So whilst you were planning Christmas and/or holidays with family and friends they were planning to make even more money with a new Bronte RSL DA.

Despite publicly promising to build only the approved 2015 DA with its 21 apartments, Danny and Rafi put in a  new DA to build an extra storey, 7 extra apartments and a ‘commercial space’ in Chesterfield Lane.

If this passes and zoning limits are breached, other large scale developments can and will follow. The unique character of Bronte will be lost.

The amended Bronte RSL DA (DA 264/2015) has been given deferred commencement approval by the WDAP. The consent was given despite blatant breaches of the strategically determined planning controls for the site. Read our media release here

There is more to this DA than meets the eye. Our analysis shows that the approved building is:

March 2015: A victory for our community

On 11 March 2015 the Head of the Department of Planning & Environment dismissed the proposed developer-written planning controls for the Bronte RSL site.

Listen here to Alan Jones talking with Save Bronte’s Stephen Lightfoot about democracy and the Bronte RSL: 2GB audio

Save Bronte Scales of Justice – The Movie

A massive development application was lodged in March 2013 to turn the existing Bronte RSL site at 113 Macpherson Street, Bronte into a high-rise building with a shopping mall below. 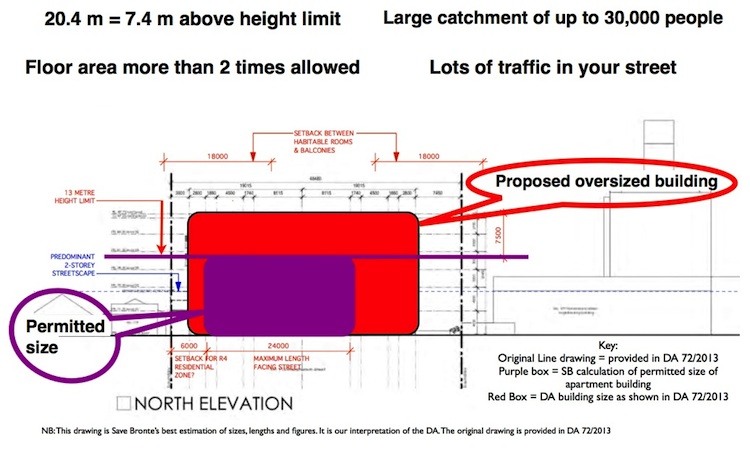 After the DA was refused by the JRPP due to its size and height, the developer requested planning control changes (planning proposal) that would have allowed this proposal to go through and would have changed Bronte forever. What is currently designated as a Neighbourhood Centre would have turned into a major shopping strip, with serious implications for traffic, congestion and small-scale local businesses. The planning proposal was refused by Waverley Council and eventually the Department of Planning in March 2015.

For more information on the developer, the RSL and the proposed development, click here to view a report on the ABC’s 7.30.